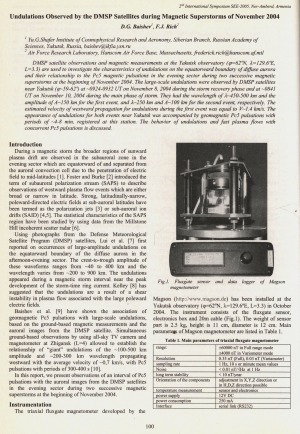 Подборки
DMSP satellite observations and magnetic measurements at the Yakutsk observatory (φ=62°N, λ=129.6°E, L=3.3) are used to investigate the characteristics of undulations of the equatorward boundary of diffuse aurora and their relationship to the Pc5 magnetic pulsations in the evening sector during two successive magnetic superstorms at the beginning of November 2004. The large-scale undulations were observed by DMSP satellites near Yakutsk (φ~59-62°) at 0924-0932 UT on November 8, 2004 during the storm recovery phase and at~0841 UT on November 10, 2004 during the main phase of storm. They had the wavelength of λ450-500 km and the the amplitude of A~150 km for the first event, and λ~250 km and A~100 km for the second event, respectively. The estimated velocity of westward propagation for undulations during the first event was equal to V~1.4 km/s. The appearance of undulations for both events near Yakutsk was accompanied by geomagnetic Pc5 pulsations with periods of ~4-8 min, registered at the station. The behavior of undulations and fast plasma flows with concurrent Pc5 pulsations is discussed.