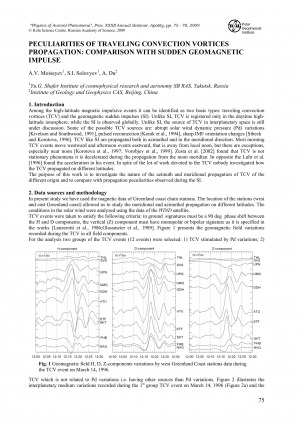 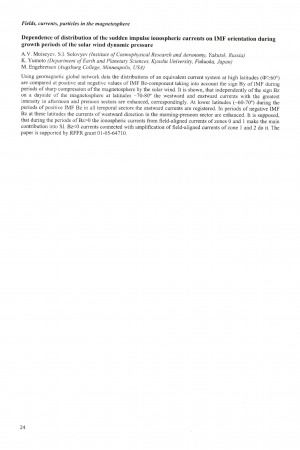 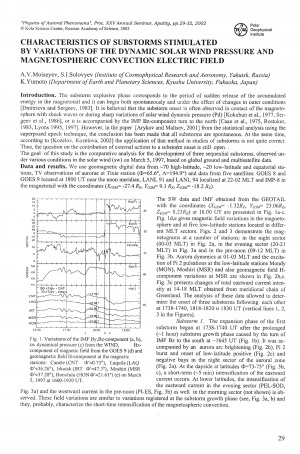 Авторы:
Moiseyev Aleksey Vladimirovich, Solovyev Stepan Ivanovich, Yumoto Kiyohumi
Заглавие: Relation between the formation of preliminary and main SI impulses during a sharp compression of the magnetosphere by solar wind

Specific features and development of Pi and Pm impulses at latitudes from the equator to the polar cap are studied. It is shown that formation of Pi and Pm impulses at high latitudes (Ф'=70°) is related to simultaneous intensifications of the westward and eastward currents on the dayside of the magnetosphere with a consequent shift of the eastward current to the pole. It leads to an increase of duration of Pi impulse with the growth of latitude. Inversion of Pi and Pm signs relative to the noon meridian takes place only at Ф'≈36-60°. At these latitudes the duration of Pi impulse also increases with growth of latitude, but the increase velocity is one order of magnitude larger than at Ф'=63-83°. The current system of SI impulse and possible reasons of Pi and Pm formation at different latitudes are discussed. 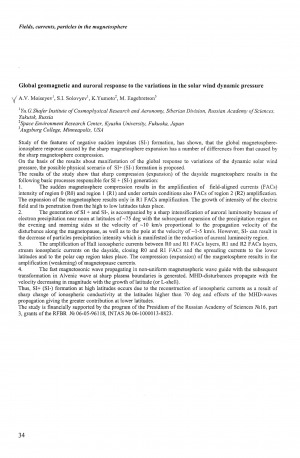 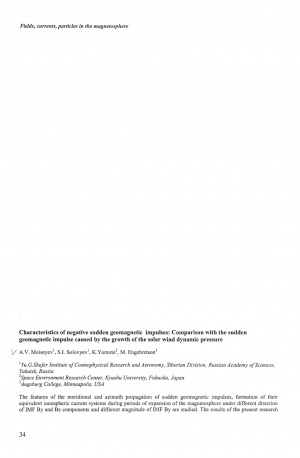 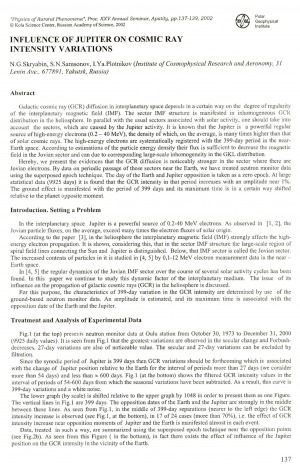 Galactic cosmic ray (GCR) diffusion in interplanetary space depends in a certain way on the degree of regularity of the interplanetary magnetic field (IMF). The sector IMF structure is manifested in inhomogeneous GCR distribution in the heliosphere. In parallel with the usual sectors associated with solar activity, one should take into account the sectors, which are caused by the Jupiter activity. It is known that the Jupiter is a powerful regular source of high-energy electrons (0.2-40 MeV), the density of which, on the average, is many times higher than that of solar cosmic rays. The high-energy electrons are systematically registed with the 399-day period in the near-Earth space. According to estimations of the particle energy density their flux is sufficient to decrease the magnetic field in the Jovian sector and can due to corresponding large-scale inhomogeneity in the GKL distribution. Hereby, we present the evidences that the GCR diffusion is noticeably stronger in the sector where there are Jovian electrons. By data on periodic passage of those sectors near the Earth, we have treated neutron monitor data using the superposed epoch technique. The day of the Earth and Jupiter opposition is taken as a zero epoch. At large statistical data (9925 days) it is found that the GCR intensity in that period increases with an amplitude near 1%. The groud effect is manifested with the period of 399 days and its maximum time is in a certain way shifted relative to the planet opposite moment. 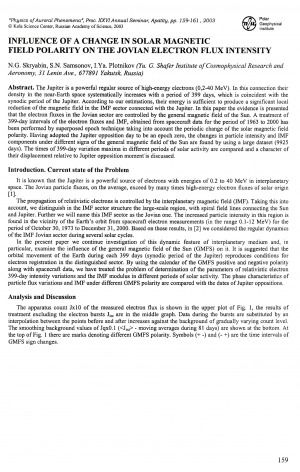 The Jupiter is a powerful regular source of high-energy electrons (0,2-40 MeV). In this connection their density in the near-Earth space systematically increases with a period of 399 days, which is coincident with the synodic period of Jupiter. According to our estimations, their energy is sufficient to produce a significant local reduction of the magnetic field in the IMF sector connected with the Jupiter. In this paper the evidence is presented that the electron fluxes in the Jovian sector are controlled by the general magnetic field of the Sun. A treatment of 399-day intervals of the electron fluxes and IMF, obtained from spacecraft data for the period of 1963 to 2000 has been performed by superposed epoch technique taking into account the periodic change of the solar magnetic field polarity. Having adopted the Jupiter opposition day to be an epoch zero, the changes in particle intensity and IMF components under different signs of the general magnetic field of the Sun are found by using a large dataset (9925 days). The times of 399-day variation maxima in different periods of solar activity are compared and a character of their displacement relative to Jupiter opposition momentsis discussed. 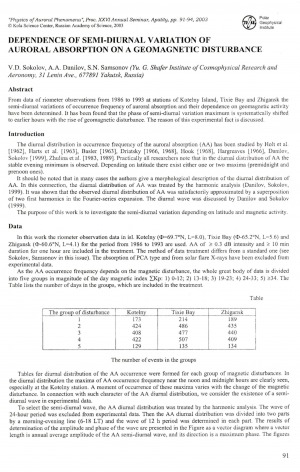 From data of riometer observations from 1986 to 1993 at stations of Kotelny Island, Tixie Bay and Zhigansk the semi-diurnal variations of occurrence frequency of auroral absorption and their dependence on geomagnetic activity have been determined. It has been found that the phase of semi-diurnal variation maximum is systematically shifted to earlier hours with the rise of geomagnetic disturbance. The reason of this experimental fact is discussed. 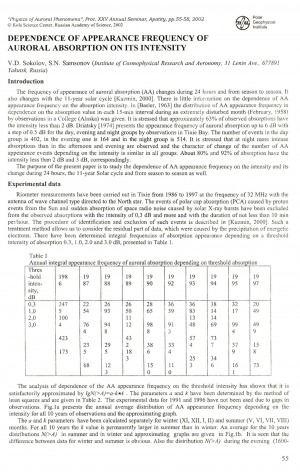